Will Wiles takes us on a local, UK holiday, with this selection of books on British seasides and their architecture.

The pleasure pier is such an established part of the scenery of the British seaside that we forget their fantastical nature. They are “the most precarious and transitory of built structures”, writes Fred Gray in The Architecture of British Seaside Piers. It is, in some ways, “ludicrous” to build over the hostile margin of land and sea. A pier straddles three different types of environment: dry land, open ocean, and the ever-changing tidal zone of soft sand and pounding waves. The strand is inhabited by creatures including shipworms and gribbles, which feast on wood, while water, oxygen and salt energetically corrode iron. 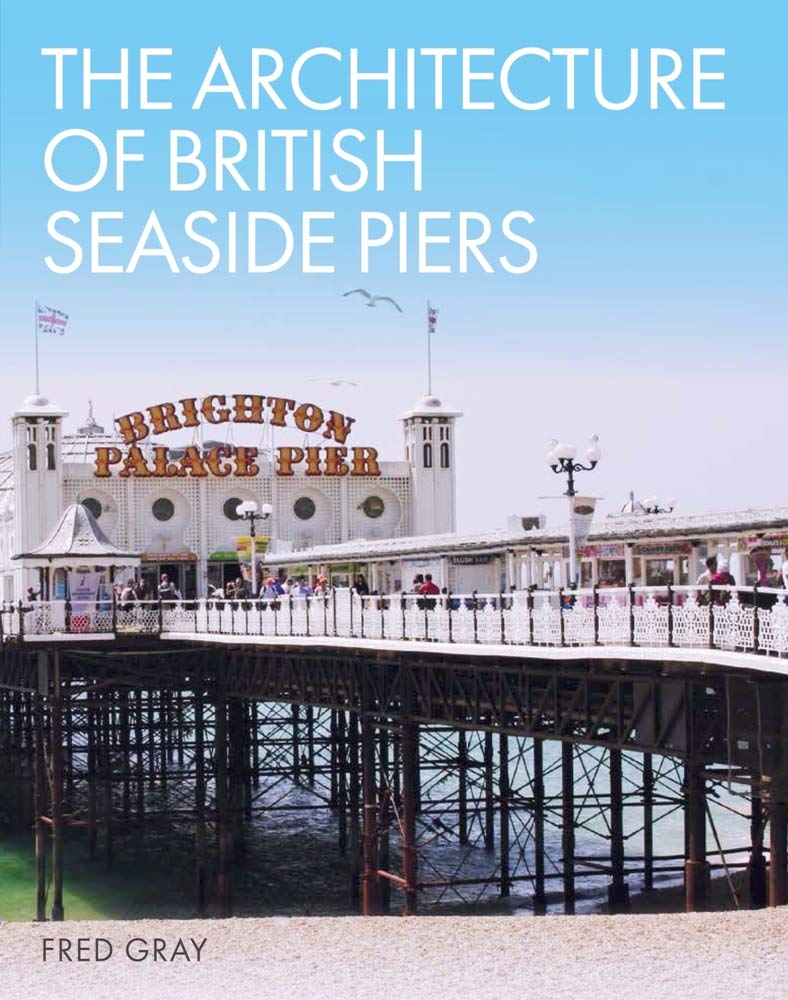 So why build in these outrageous conditions? For fun, of course. Piers evolved out of utilitarian structures: harbour arms, jetties, landing stages and so on. And while some retained transport functions, helping passengers reach boats even at low tides, their purpose was primarily pleasure. Not bound by precedent, pleasure piers were able to innovate to a remarkable degree, testing out new structural techniques and outlandish architectural forms. Brighton’s chain pier, built at the early date of 1823, carried itself like a suspension bridge with pyramidal towers modelled on the pylon gateways of the Temple of Karnak in Egypt. Prolific pier designer Eugenius Birch’s structure at Bournemouth featured a pinnacled gothic entrance pavilion. Orientalism was a persistent favourite: advanced iron structures sprouted pagodas, domes, minarets and geometric screens. Everything about piers seems gaudy, including their ends: hammered by storms, smashed into by ships, destroyed in war, engulfed by fire.

The seaside pier was a broadly Victorian phenomenon – of the 100 or so built, only a handful date from before or after Victoria’s reign. In the 1890s, piers were being built at such a pace that a commentator remarked that it would soon “be necessary to alter the map of England, and represent it as a huge creature of the porcupine type, with gigantic piers instead of quills.” “The beach” is a relatively recent attraction – 19th-century holidaymakers went to the seaside for contact with the sea and the air, and the pier offered an abundance of both. “[Piers] enable the seaside to be experienced in a more intense manner than simply being on the shore or a seafront promenade,” Gray writes. “The senses – including touch and feel, sound, taste and smell – are all assailed more vividly away from the land. Piers transport people to other environments and, at their most powerful, may suggest other worlds, places and times.”

Gray was historian and archivist for the Brighton West Pier Trust, and is the author of a history of seaside architecture in general. The Architecture of British Seaside Piers occasionally over-explains and repeats itself. But it is crammed with detail and interest, and richly illustrated, including many photographs from the author’s personal collection. It promises to be the definitive work on a fascinating topic.

Come the inter-war years of the 20th century, the British seaside was losing its ability to attract better-off visitors, who were drifting to sunnier shores. Once again, architecture was used to try to lure people back. Art Deco by the Sea was published to accompany an exhibition of the same name at the Sainsbury Centre for Visual Arts in Norwich. However, that exhibition opened in February 2020, just as the pandemic was taking hold. Fortunately, we have this interesting book, edited by Ghislaine Wood, deputy director of the centre and curator of the exhibition.

Art Deco was never a dominant style in the UK, outside a few limited typologies such as cinema chains, but it did develop a particular association with the seaside, which continues to this day. Serge Chermayeff and Erich Mendelson’s De La Warr Pavilion in Bexhill-on-Sea, completed in 1935, was one of the first modernist public buildings in the country. Widely disliked at the time, and closed and neglected for many years in the later 20th century, it is now once again the town’s most significant attraction. Just a short distance down the road, the small town of St Leonards-on-Sea is still dominated by Marine Court, a shining 14-storey modern slab designed by Kenneth Dalgliesh and Roger Pullen and completed in 1938. These buildings are still vastly important landmarks, and so distinct from their surroundings that one wonders at how they came to be.

Art Deco by the Sea hints that the peripheral nature of the seaside might have helped – it was not closely watched by centralised institutions. But the style also owed a great deal to the ocean itself. Marine Court, with its curved end balconies borrowed from the liner Queen Mary, it was a piece of luxurious transatlantic high technology dragged up onto the shore. The expansive glazing and shining ferroconcrete of these buildings played to a new interest in the health-giving properties of sunlight and air. Moreover, they were simply new and different, at a time when the Victorian and Edwardian architecture around them was tired and unfashionable.

As well as editing, Wood contributes half of the essays. Bruce Peter writes the essay on architecture, and another showing how sleek and advanced planes, trains, ships and motor coaches gave the style its associations with modernity, prosperity and comfort. This association was aided by the contemporaneous emergence of the poster as a distinct art form, as Gill Saunders explores, creating memorable pieces of graphic art that are still copied and loved today. Other essays look at art, crafts, furniture and – a particular highlight – amusement design. Thorough and detailed, with meticulous naming and dating, the texts are sometimes a little dry, but that doesn’t detract from an immensely valuable guide to a brief and distinctive moment in British design. It is splendidly illustrated with contemporary material, including large fold-out reproductions of some posters.

Bringing us to the present day is Funland: A Visual Tour of the British Seaside, a large-format collection of photographs by Rob Ball, published by Hoxton Mini Press, purveyor of nostalgic picture books to every arty coffee table east of King’s Cross. This is a colourful but forlorn trip around the coast, a terrain of slot machines, unappetising menus and garish, patched carpets. Neon and vinyl promises seem unlikely to be fulfilled in the dispiriting clutter beneath. The palette is of course unspeakable, with every colour unknown to nature, all fixed in a slightly saturated sunlight. It’s all rather shabby, but life is ubiquitous. There’s a wry edge throughout: we’re in the documentary mode established by Martin Parr in the 1980s and 90s, with its sympathetic but unsparing eye. 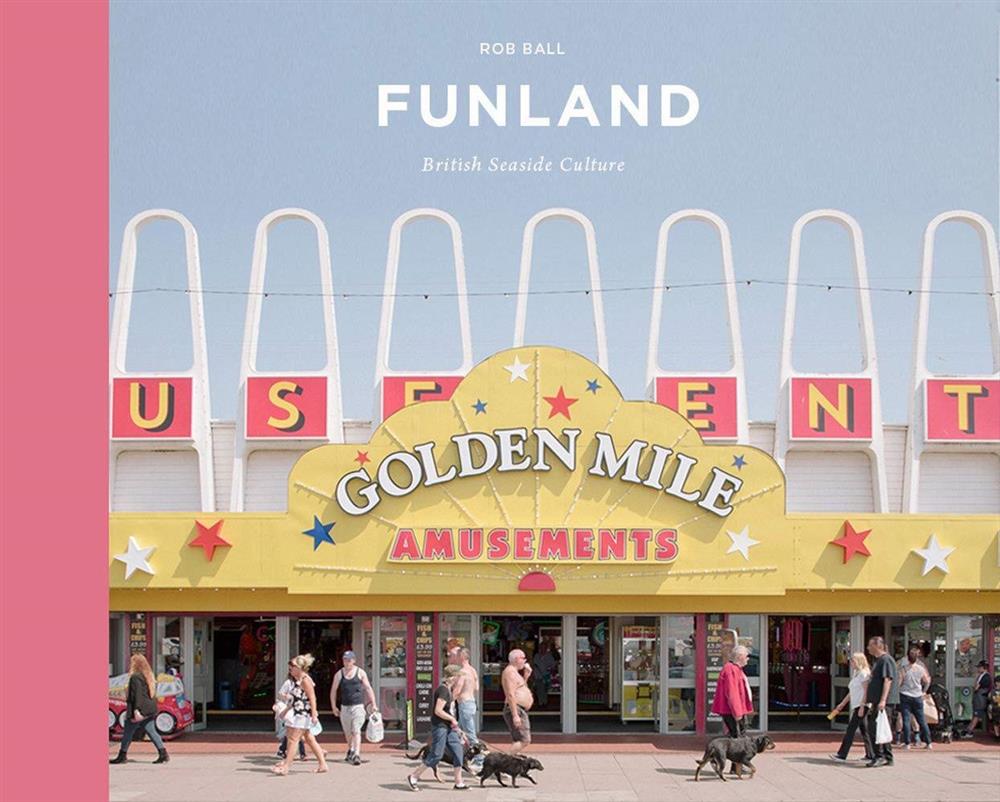 That’s familiar territory, but Ball brings something new. The seaside vernacular is a kind of collage, frantic yet tired, with buildings, landscape, signage, fittings and moveable objects all seeming to emanate from different eras and different levels of prosperity. Ball has a splendid eye for exquisite corpses and bizarre architectural mismarriages. All through Funland are Victorian, Edwardian and more recent buildings, sometimes quite grand and sometimes on the plain scale found on any high street, that have been parasitised by the neon, rippling lights and elaborate frontages of mid-century Las Vegas.

For Lucy Davies, who contributes Funland’s introduction, this contrast speaks of “a nagging undercurrent of melancholy and dereliction, the feeling of something past its best”. Seaside towns rank among the most deprived paces in the country. But it would be a mistake to regard this dilapidation as inevitable, especially when the nation’s habits of living, working and holidaying are changing. A better way to see the seaside would be to look at the shore itself, and the play of ocean, sky and tide: an environment of constant change and reinvention. What all three of these books show is how the edge of the land has been a curious zone of architectural experimentation shomehow exempted from the rules that apply everywhere else.